Archive for the ‘Games’ Category

Pixel Proof is our newest app for desktop computer platforms.  It’s a great new editor that approaches pixel art in a special way. The interface is simple, the tools are fresh, and much of it is customizable. Set up your palette and toolset and the layered file format will save them along with the image. With Twitter integration, you can even tweet your art directly from the app!

The Pirate Edition is free and fully-featured. Give it a try and let me know what you think! If you like it, buy it!
https://dinomage.itch.io/pixel-proof

With all of the exciting features packed into Pixel Proof and the future plans, Pixel Proof is lined up to be the cleanest, most flexible pixel editor available.  Help us get there by trying it out and providing feedback.  We appreciate all input! 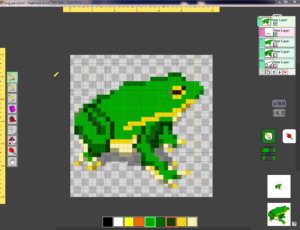 This is just a quick post to let everyone know that Tangible Math is available now! I’ll have a more complete introduction to it soon (update: see the product page), but you can already get it on iTunes, Google Play, the Amazon Appstore, and the NOOK Store.

Tangible Math is a full set of virtual manipulatives for preschool, kindergarten, and 1st grade math. These are physical objects you’d use to teach math concepts with your child. Instead of setting a kid down in front of an app and walking away, this app facilitates interaction between the teacher and the student. Just check out the screenshots and you’ll see what it’s all about!

Gladiator is a lot of fun and it’s nice to play an updated throwback to the classic MS-DOS days. However, the video game market is not quite so nice!

The OUYA represents a change to the way games are discovered by players. The traditional method of finding games in the local brick & mortar shop or even the recent way that Google Play and the iOS App Store interface with the user are not proper solutions to the modern problem of finding the right game/app for you.

I’d love to say that the OUYA has the answer, but it’s not there yet. There’s promise though. One promising feature is the Sandbox. The Sandbox is where all new games go on OUYA. It prevents the store from being overrun by tons of junk, which is great. The issue is that the games that stay in the Sandbox for a little while end up having their own discoverability problems. That’s where Gladiator is now.

Considering that, we’re making Gladiator available for free now on the OUYA, the best place to play this kind of 4-player co-op game. If all we get out of this is that more people get to play this game, then that’s a job well done! We hope you’ll help us spread the word so that the community of this great gaming classic will continue to grow.

Gladiator is out on OUYA!

I totally pressed that publish button!

Seriously though, it’s a big deal.  Gladiator is now officially on the OUYA!  If you happen to have one of these nice $99 microconsoles, you can find our latest game in the Sandbox.

Now the trouble is getting out of the Sandbox!  We’re working on spreading the word about this great classic game so it will be more discoverable in the storefront.

Tomorrow is the release day for Gladiator!  Woo!  A lot has gone into the code to get it ready, but it’s finally there.

I’m looking through the changelog and it’s pretty crazy.  I spent a lot of time making a whole new level editor, but in order to do that, I had to refactor a ton of data structures to hold character, level, and campaign info.  New features came in that changed the feel of the game in several positive ways.  The player is given much more information both in and out of combat so they can control their team more effectively and track and enjoy the team’s progress.  And of course, real controller integration on OUYA is sweet.  Overall, at least a hundred bugs were squashed, and I think I only made 80% of them! 😀

So, it’s nice to bring the Openglad project to this point.  I love playing it on OUYA with my kids and I really hope it catches on with a significant audience.  I’m just waiting for another approval of this latest version to be put into the OUYA market (Discover), then we should be seeing it live tomorrow!

Lately, as I’ve gotten the time, I’ve been pounding away at Gladiator (Openglad), a cool retro action RPG that I loved as a kid.  It’s amazing that after all these years (um, 18 since the original release?), I can pick up the code and improve the game I played so much so long ago.

I released a version on Google Play, the Amazon Appstore, and the NOOK Store.  I have been working on a new level editor for a bit.  It’s incredibly improved from the old one; it feels much better to use and has more features.  Best of all, it is now integrated into the game itself.  I’ll be releasing an update to the Android version that includes the level editor.  Also, there are plans to include a sharing system so you can create and share your own levels and campaigns as well as download and rate ones that other people make.

Another bit of news is that I bought an OUYA!  Incidentally, that also means I’m working on the OUYA port of Gladiator…  Yeah, it’s pretty awesome with 4 players smashing around on a big TV.  The downside to mobile Android really is the lack of local multiplayer, so I’m really pleased to have the OUYA as an outlet for the PvP and cooperative multiplayer experiences that I love.  OUYA porting is mostly controller integration work, which can get hairy when it comes to menus, but it’s already working well.  I have a few more details to smooth out, then it’ll be go time.

Don’t Blow It! in PBS Off Book

Posted by: Jonny D in Don't Blow It!, News

I guess I should have shared this a long time ago, but better late than never!

Don’t Blow It was included in a PBS Off Book feature about indie game development.  Our presence at Boston FIG is the reason for this happening (you can see some other BFIG entries alongside us).  It’s pretty cool to be informally recognized as “indie enough”, or at least Cassie’s art gave people that impression. 😉

We’re at 0:43, right after that heartwarming holiday photo of Team Meat.

Here’s a quick look at one of the new possibilities in the future of Don’t Blow It.

What you see here is the work-in-progress of creating structures in-game: Building.  The new feature, which is pretty unusual for a platformer, lets you join certain “buildable” objects together.  This lets you solve many puzzles and obstacles with tremendous freedom (and lets us design some pretty awesome puzzles for you to solve).

END_OF_DOCUMENT_TOKEN_TO_BE_REPLACED

Posted by: Jonny D in Dev, Don't Blow It!, News

We’re still working on the new design for Don’t Blow It, so there will be lots to talk about soon.  For now, I’ve thrown together a video that shows what the Boston FIG version is like.  I hope you like it!

Don’t Blow It! – Particles plus

First of all, I made a particle engine.  Okay, it sounds like reinventing the wheel, and really… it is.