Archive for the ‘Dev’ Category

This is part 1 of my HowTo: SDL on Android series.
(next)

I’ve been recently wanting to get into mobile development.  How does one do that?

Well, your main options are iOS (iPod, iPhone, or iPad), Windows Phone (7 or 8), BlackBerry (BlackBerry smartphones, PlayBook), and Android (most of the other devices on the market).  I had always leaned toward Android as it’s slightly more open than the others.  Also, we’ve been looking at getting a Kindle Fire HD sometime. So, we finally made the decision and bought a Kindle Fire HD 7″.  It’s a decent tablet, but I want to make games!

My experience and codebase is all based on SDL.  The SDL devs have done a lot of work recently getting the new version of SDL working nicely on mobile platforms.  I had barely messed with SDL 2.0 before this, so I really had to jump all in. This will be a work-in-progress tutorial-style post as I document the path I take to get started and get my existing code ported.  END_OF_DOCUMENT_TOKEN_TO_BE_REPLACED

Here’s a quick look at one of the new possibilities in the future of Don’t Blow It.

What you see here is the work-in-progress of creating structures in-game: Building.  The new feature, which is pretty unusual for a platformer, lets you join certain “buildable” objects together.  This lets you solve many puzzles and obstacles with tremendous freedom (and lets us design some pretty awesome puzzles for you to solve).

END_OF_DOCUMENT_TOKEN_TO_BE_REPLACED

Posted by: Jonny D in Dev, Don't Blow It!, News

We’re still working on the new design for Don’t Blow It, so there will be lots to talk about soon.  For now, I’ve thrown together a video that shows what the Boston FIG version is like.  I hope you like it!

Posted by: Jonny D in Dev

If I ever have a wish for making video games, it’s to do it faster and better. That’s why I spend a lot of time on tools. I don’t really like doing tool work, but it is important to developing an efficient workflow. This time, that tool is a C++ API for loading and using the Spriter character animation format, SCML. 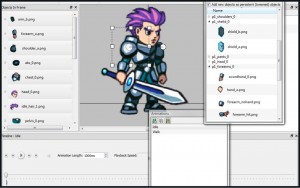 Spriter is an animation creation application.  You drop images into the editor which will be put together to make your character.  Then you can set keyframes as you move the images around.  With this style of animation, the movement of the character is interpolated from these keyframes to give a smooth, continuous animation at any playback speed.  The animations are saved in a special XML format, named SCML.  Spriter had a very successful Kickstarter campaign this year, so it is in active development.  However, that is specifically for the editor itself and the data format.  The “plugins” that allow you to use the animations in various game engines and programming languages are community-driven.

END_OF_DOCUMENT_TOKEN_TO_BE_REPLACED

Don’t Blow It! – Particles plus

First of all, I made a particle engine.  Okay, it sounds like reinventing the wheel, and really… it is.

END_OF_DOCUMENT_TOKEN_TO_BE_REPLACED

The Boston Festival of Indie Games submission period for digital games ended last night and I have to say…  I’m happy with my entry.

I worked furiously to squash some bugs and get the BostonFIG demo level finished earlier this month.  Shortly before the deadline, coding work on Don’t Blow It slowed a little as I began polishing it and I started to put more thought into the business side of things.  There’s a lot to consider as I try to make not just a game to play with the kids, but a product that other people will want and be able to get.  This festival will be a good chance to expose people to the game and judge their reactions.

END_OF_DOCUMENT_TOKEN_TO_BE_REPLACED

The Boston Festival of Indie Games is a new local showcase for indie games in the Boston area. Lately, I’ve been working on the little details in Don’t Blow It that are important for the festival submission. That’s right, we’ll be showing off the game right there in Boston!

Take a look at the official site for details: http://bostonfig.com

It’s free to register and attend.  If you’re in the area, sign up and come see us on Saturday, September 22nd!

In my recently released game, Button Battle, I opted to use RakNet to implement simple networked multiplayer.  I figured I should talk a bit about how that all went, since I would have enjoyed reading such an article myself… and frankly, I’m going to forget this all soon and I will have to read it later.

I chose RakNet because it has been around for a while (mature), it works on Windows, Linux, and more (cross-platform), and it is free for my purposes (affordable).  I have my own networking library based on SDL_net that is certainly cross-platform and affordable, but I would be making a bad decision (personally, as a game dev, and as a business) if I put more time into the library instead of my games.  SDL_net does what it does well enough, but there is a lot of work to do in order to get something out of it that can be used in games.

END_OF_DOCUMENT_TOKEN_TO_BE_REPLACED

As promised, here’s the source code for Button Battle.  As everyone should expect, it’s not the cleanest code, but I do have plenty of experience and it is commented.  I expect that the code might be a valuable resource for people who want to see how things were done.  To that end, I also made a point to keep all networking code confined to a single file.

END_OF_DOCUMENT_TOKEN_TO_BE_REPLACED

Great news!  Button Battle is finished and you can play it right away…  for FREEEEEEEEEEEE!!!

Okay, I haven’t finished a game yet that I plan to sell, but whatever.  Here’s another description for you:

Button Battle puts two players against each other, attacking and blocking until one player is left standing.  The combat is turn-based, where you choose to attack or block high/middle/low depending on how your opponent is attacking.  The quicker you react to block an attack, the more damage your next attack will do.

END_OF_DOCUMENT_TOKEN_TO_BE_REPLACED

Add a Comment
Back to top
Previous EntriesNext Entries