We’re just coming back from a surprisingly widespread power outage around here, and I actually managed to get things done.  This was a big thing, too. 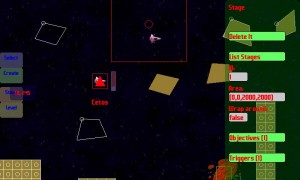 The new GigaSun Jet level editor is done, for now.  “New” because I had another one I made long ago.  “For now” because it’s far from polished and could be plenty more intuitive.

The old editor was a stand-alone application I started a couple of years ago.  It could fill map tiles with walls, ships, or turrets.  That’s basically it.  Well, it could edit objectives in a limited way, too.  It was a serious pain to keep the level editor up to date because it used a completely separate codebase.  It was not much fun to add new features because GSJ was a moving target back then.

Now, I’ve finally cut loose the old editor.  I mentioned it before, and now it’s gone for good.  The new one can do way more (actually, just about everything one could do by hand-editing the map files… but now you can see it!).  There’s also an interesting twist to this accomplishment.  I used some code from a nearly dead project to try to get a flexible system of buttons in the level editor GUI.  I struggled with the code for a while, hunting down the logic errors and memory issues until I found it: a way to make it work just as intended.  To make a long, technical story short, I improved the code considerably and refined its focus so much that it might lead to a revival of that old project (err – when I have the time).

Beside all that, the important point remains that the story can now begin being expressed in the missions.  What is the story?  Well stick around and you’re sure to hear.