A shooter, by definition, involves shooting, of course.  You can’t very well have a shooter or shoot ’em up without any sort of shooting.  And there’s something about our nature that enjoys this kind of activity.  Just as part of being human, our adrenaline starts flowing when we feel invested in a situation that is not totally predictable.  The main draw to shooters and shoot ’em ups in particular is this kind of unpredictable rapid action.  But is there more? 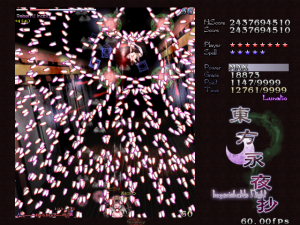 Can you actually have fun in a shooter when you’re not shooting anything?

There are two ways to look at this question.
1) Are there things other than shooting (and shooting-related things, like dodging) that make typical shooters fun?
2) Are there things you can add to a shooter to create fun non-shooting parts?

I’m going to avoid getting too involved in the exploration of these questions.  That would take a couple more blog posts and time that I’d rather spend developing my games!  Optimistically, since we’re trying to make a fun game, the answer to both should be “Yes”.  The trouble is figuring out how to do it in a given shooter by considering these questions.

The first question gets into game feel.  Visuals, immersion, and solid human-computer interaction can contribute to the fun, but can they do it on their own?  I say no…  They can be totally innovative, but without a solid backing that typically promotes fun (interpretation, story, creation), they need something else.  Look at the graphics of older games which “wowed” when they were released.  Look at games with a control twist (like Sub-Terrania on Sega Genesis).  These things can be really fun when paired with the action of a shooter.  But there’s always something else that embodies the fun when we take away the graphics, immersion, and novel controls.  It seems we’ve come close enough to the answer here.  So I guess for now: focus on the action.  It really is where the fun originates in a shooter.  The other parts of a typical shooter really are details. If you get the action right, you can build it up into a great game.

Okay then, if all that stuff is summed up as details, how can we really augment the fun?  How can we make an atypical shooter?

First of all, get the basics down.  One of the most common fundamental mistakes is to frustrate the player.  If a game feels like it is cheating or broken, IT IS.  It doesn’t matter if everything seems balanced or equal from the designer’s perspective.  Some game developers put in things meant to add challenge or balance the game, yet from the player’s perspective, the game is cheating them.  If you ever came across Armored Core’s “Rebel Points”, you know the feeling.  Blech…  One thing I can often be quoted for is that “Fair and equal are not the same thing”.  It is a concept to be applied in literally every aspect of life, including game design.  Another basic component to consider is replay value.  The problem with depending on action to be fun is that the action has to end.  For this very reason, games with the very best replay value and play length tend not to be action games.  This is in part because current software has obvious limitations.  We do not yet have mainstream tech that lets us ask the computer to create novel situations and objects for players to experience.  What this leads us to is the realization that the shooter genre is limited.  We need something else instead of just shooting! 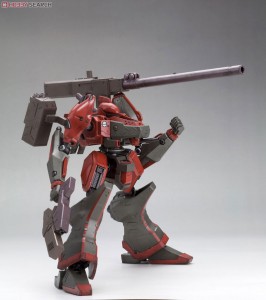 Nineball from Armored Core: Master of Arena - What a cheater. He and some other ACs could fire shoulder weapons while in the air and shoot sword waves with any sword part. You can't. (image from http://gwing-online.com/)

It seems we must look to other game genres for the variety we need to pack more fun into a shooter.  This is actually a good thing, as other genres emphasize different ways of thinking instead of constant action.  Some of the usual suspects for expanding a shooter are strategy, simulation, and RPG.  Strategy elements, including trading, can add a very deep layer to a shooter.  Star Control 2 does this to great effect.  The drawback is that it tends to slow down or segment the action significantly.  Simulation in many cases is just the use of real physics calculations in rigid-body interactions.  Many, many Flash games are just old ideas slapped onto a physics engine.  Angry Birds is conceptually very simple, but when a whole bunch of predictable interactions occur together, chaos and fun ensues.  RPG elements are those which allow your main character to change and grow.  Lots of shooters take small amounts of this character scaling idea.  I think they should do more.

The aim of GigaSun Jet is to pull together great action, intuitive simulation, simple exploration, and deep customization.  For the customization, I took common ideas from RPG land and expanded them in the shooter domain.  RPG elements have been brought into other genres extensively, but my problem is with how limited these elements are when it used in shoot ’em ups.  GigaSun Jet makes strong strides toward fleshing out a broader shoot ’em up experience.  I can only dream of what a possible sequel will do.

I suppose I’ll get to the other questions next time.  They deal more specifically with how doing some “not shooting” is fun in GigaSun Jet.  Adios!

One Response to “GigaSun Jet design: Fun without shooting”