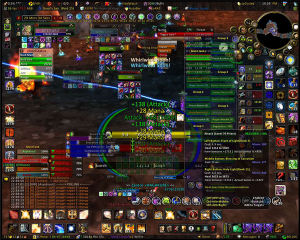 World of Warcraft – Did someone say content? (image from http://roleplayhaven.com)

The two choices above have an obvious struggle.  One seems to be much more work than the other!  Well, the truth is that most games employ a mixture of the above two approaches for each different type of content.  A game might have minimal music which covers the mood of each level, but it has hundreds of different enemies that you might face.

It seems, then, that it is a matter of focus.  Games will have more content in the areas in which the designers are focused.  If the designer wants to focus on enemies or weapons, then there will be lots of different kinds.  However, this is not quite so.  For more concrete examples, take Diablo 2’s equipment system and Braid’s level design. 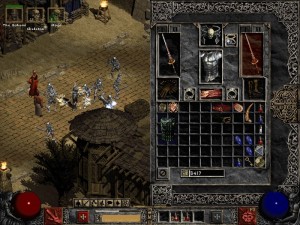 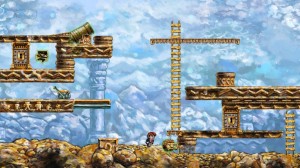 Braid – You must play this game. (image from http://bestindiegame.com)

Equipment in Diablo 2 is an example of the “tons” approach.  In Diablo 2, you find many, many randomly generated pieces of equipment.  It is totally up to chance whether you find items better than what you already hold.  As you progress, you tend to find more powerful items, but you can always find (relative) junk.

Level design in Braid is an example of a good way to do the “enough” approach.  The deeper difference that I alluded to earlier in evident in Braid.  The amount of content does not necessarily dictate the play experience.  In Braid, each puzzle has a specific purpose for introducing a novel way to use the time-manipulation abilities you have in the current level.  Braid’s design tries hard to minimize repetition so that you are always trying new things.  Because of this, there are only just enough levels and puzzles to explore the abilities.  The game has a goal in this and does not force players to slog through countless hours of repetition to get the full experience of the game (like Diablo 2 does).  Which way is better, then?  Well, one can hardly make such a judgment here, but what can be told is that there’s much to learn from such examples.

The “enough” approach surely makes the player’s experience easier to shape to fit a clear plan, but replay is limited.   Every player is expected to fully use and experience each piece of content at least once.  From there, the exploration of the system is finished and the rest of the game must pick up the slack or else disappoint the player.  Replay often suffers.

In general, the “tons” approach lends more to a wider feeling of unknown.  You can’t predict what your experience will be like or what content you’ll discover, even once you’ve witnessed all the extant “types” of parts.  This is good.  However, a single play has the chance to be entirely lackluster.  In some games, the entire experience of a single player will be incomplete.  Often, we say that no player will experience all of the content, but each piece of content will be experienced by someone.  Plus, some content may never be fully used (like a lame weapon).  This, to me, is an issue.

In my parts system in particular, I want possibilities and exploration with fewer boundaries.  Therefore, GigaSun Jet uses the “tons” approach for that system.  Let’s see what we can do about going beyond the usual.

Can the wasting of content be avoided and the parts system still be fun?

Each potential piece of equipment represents a different way to enjoy or appreciate a game.  Where’s the love for the rusty dagger when you have a store full of magical swords and axes?  The idealist within me is sure that you could do interesting things in a game with just a rusty dagger.  You could even have fun in a game like Diablo 2 with a simple, weak weapon.  Am I wrong?  To make this happen, there has to be something beyond getting the “best part / piece of equipment”.  When it’s obvious which part you should (or should not) buy because there’s a clear “best part”, then you’re just making the same choices that a good computer would.  That’s no good at all.  It’s not even about wasting my time making the items.  It’s about wasting the possible experience.

Diablo 2 – This is actually reasonable, since belts don’t typically offer much coverage…  it still stinks. (image from http://diablo.incgamers.com/forums)

I probably cannot fix this issue completely, but I want to give the player more freedom by making the concept of “best part” subjective or even fail to apply.  That’s the idea and there are a lot of ways to get there.  They are just so underemployed that it’s like brand new territory.

This is perhaps the greatest reason I have for creating GigaSun Jet.  There is a lot of fun to be had in the experience of parts that I’ve never seen before, so I’ve designed GigaSun Jet to explore a few methods for ruining this “best part” idea…

This is done in a lot of games, but is still a good idea.  Some parts working together might be better than single parts alone.  This is usually something that the player has to think about carefully, which is how part combos add to the fun of the parts system.  The player might choose a plan for his ship design and pick parts that work together toward that design goal.  Each part has several stats that make the comparison process less black and white.  You might choose one weapon because of its projectile speed, but given the same options, someone else would choose another for the higher projectile damage.  You might even find parts which have certain stats which are too high and would work better with your current equipment if the stat were lower.  GigaSun Jet adds stats that have a chosenvalue instead of a “more is better” value.  These stats are adjustable to fit your plan.

Weak parts can be better than strong parts

If it’s possible for weaker parts to be better than the stronger part that you already have, which do you choose?  GigaSun Jet approaches this in one way with upgrade ranges.  Every part can be upgraded, but each part also has a limit to its upgradability.  You might have a strong part, yet you want the weak part you see in the store because it can be upgraded further in some stats.

There are alternate ways to do this that GigaSun Jet does not do.  One is to make the currently strong parts become weak or undesirable over time.  This can be done, for example, with a ‘durability’ stat that is tied to the power of the item or causes it to break and become useless.  Another is to create situations where strong items are temporarily worse than weak items.  This would be similar to how some Magic: The Gathering cards (such as Meekstone) only affect powerful cards.

This is big.  This is really big.  Maybe this is the only way one needs to break the “best part” pathology.  Hidden and unexpected things will make the player want to try different strategies and parts.  GigaSun Jet has a hidden system within the weapons system that is revealed a little while into the game.  The act of revealing this system causes the player to realize that there’s more to the weapons than he previously thought.  It’s not just that, though.  This particular system explicitly emphasizes a kind of scientific experimentation that will keep the player working at it on repeated occasions, trying to discover new things. Exploration is a key to deep enjoyment in games.

Well, those are some big ways to avoid wasted content and augment the fun.  There are even further ways of making the parts system fun without regard for the amount of content.  I’m sure I’ll get to those in later posts.  Where are we going next time?  Oh, I don’t remember.  Stay tuned.  😀