It’s obvious that depth is not what shooters were originally made for.  They are known for their action-oriented gameplay.  Shmups which have lots of action, colorful graphics, and took a while to beat have tended to get rave reviews.  Shoot ’em ups have always been great in the arcades because the challenge matched well with the economy of coin-ops.  When moved into the home, however, such a simple game with unlimited plays wears out quickly.  As a natural progression, shooters have incorporated some elements from other game genres.  The problem?  More often than not, these games fail to differentiate. 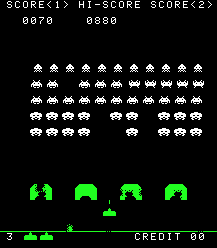 Space Invaders - Where it all started. (Image from www.wikipedia.org) 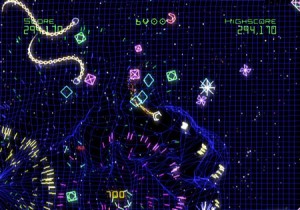 Geometry Wars - This is how far we've gotten in 25 years 😉 (image from www.armchairempire.com)

How often I have played a shooter where you can collect about three upgrades to your main weapon, a missile side-weapon, and smart bombs.  Some games offer an astounding selection of four ships (sarcasm)!

GigaSun Jet is my attempt to create a game that I will love.  As usual, if I succeed in that and nobody else likes it, I’ll still be happy.  Thankfully, my tastes have a lot in common with other people. 🙂  GigaSun Jet does not focus on trade and travel, but rather on the action that shooters do so well and the customization that I love.  To those ends, I had a lot to consider in order to get the depth the game needs.

The game isn’t finished yet, but it is far enough along that I could throw together some missions and lame dialog and call it a day (though it’d be missing a lot of content and polish).  So, it feels like a good time to start talking seriously about the decisions that went into the game.

This is the first in a series of posts I’ll be writing about the design of GigaSun Jet.  A lot of experimentation was done while working on GigaSun Jet.  No waterfall design here.  I haven’t made a ton of games, so each time I make one, it is full of learning experiences and new areas to explore.  If there was something I’ve never seen done before or another way of looking at the idea, I tried it out.  This series will explore the challenges that were (and are) faced, the unique ideas that were used (or not used), and how they come together to affect the gameplay.

When brainstorming for GigaSun Jet, I was heavily influenced by both my fond and painful experiences with several games.  They led me to some essential questions which needed to be answered.  The posts to come will discuss my answers to them.  I probably don’t have all the answers, but I do have some good ones.  Do you?

In the coming posts: